The aim of the project was to put Bath Place Community Venture back at the heart of the community it had served for over forty years in a building that would regenerate the derelict All Saints Site. We assisted the organisation to make lottery funding applications and bid for the freehold of the site from the Local Authority.

The building was severely damaged by fire in 2009, following which the worst effected parts of it were demolished and remaining areas of free standing wall were stabilised using scaffold but had since experienced further damage due to the effects of weathering.

We developed an outline schedule of spaces and area requirements through consultation with potential users of the building, and based on previous occupancy rates and use data.

The proposals created a building which was open, naturally lit, welcoming and relaxed. Its spatial arrangement encouraged interaction by creating a central social area at the heart of the building providing a new home for the Veggie Table Café, an informal meeting area, exhibition space and reception. It also had direct access to a secure external courtyard garden where café customers and meetings could spill outside. The reception area was open, and had good natural surveillance of the rooms opening from the central space and access to the toilet area.

The schemed aimed to reuse the shell of the previous buildings on the site, creating a Passivhaus Enerphit standard building within. 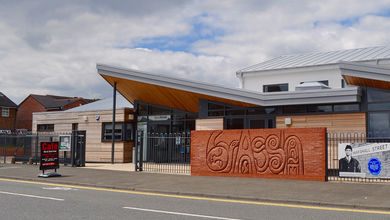 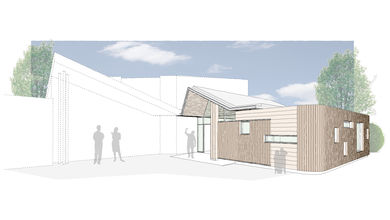 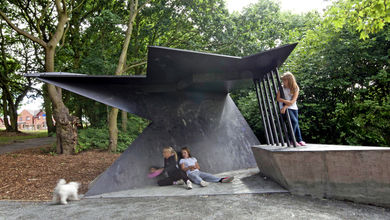