The purpose of the Worcestershire Future Climate project was to develop climate change adaptation strategies for three primary schools in the Wyre Forest area, near Kidderminster in Worcestershire.

Franche Community Primary School was built in the 1950’s with a series of later additions, and displays many of the characteristics of a building of that date, including lightweight construction, excessive glazing and poor levels of insulation. The original building was designed around a series of internal courtyards. One of these courtyards has been enclosed to provide additional floorspace, but this has reduced daylight and natural ventilation to the surrounding classrooms.

Franche offered a range of different opportunities for further study, and was of particular interest as it was typical of a number of similar buildings of that period. It was recognised that adaptation strategies developed to address some of the current problems at Franche could be applied to a large number of similar schools throughout Worcestershire and elsewhere. In this way, the results of this study could benefit a much wider group of buildings.

A series of options were developed to provide external shading through the construction of independent structures immediately adjacent to the building. This passive approach avoided the complications and additional cost that could arise through having to modify the existing building, and provided the additional benefit of creating new outdoor teaching areas for use throughout the year. The structures also created an ideal basis for a range of planting options, which could provide additional shading and also introduce a wide range of curriculum opportunities.

Construction techniques were kept deliberately simple to encourage the possibility of self building. By developing a modular “kit of parts” approach, the adaptations could be added incrementally, to respond to climate change, planned maintenance schedules and also the availability of funding. The addition of each new element would provide increased shading and enclosure, and also contribute to the development of significant outdoor teaching areas, which could be used throughout the year.

A range of options were also developed to investigate the effects of improved ventilation within the building. The enclosure of an external courtyard in the 1990's had compromised both ventilation and daylight to the surrounding classrooms. The courtyard had been enclosed with a metal roof and fixed polycarbonate rooflights, resulting in poor ventilation and daylight. Three options were developed to investigate different methods of introducing additional daylight and ventilation, to improve the internal environment in both the central space and also in the surrounding classrooms. The proposals were based on a modular grid which provided the flexibility to incorporate rooflights and vents where required. These were modelled individually, and the results were evaluated both in isolation and also in conjunction with the external shading options. 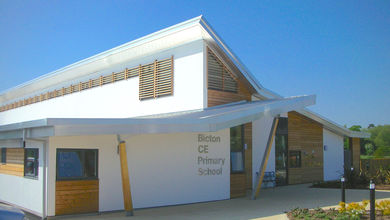 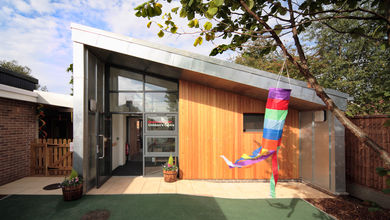 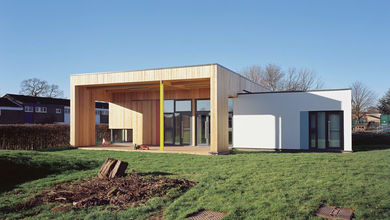